Roger Chou’s Undisclosed Conflicts of Interest: How the CDC’s 2016 Guideline for Prescribing Opioids for Chronic Pain Lost Its Clinical and Professional Integrity 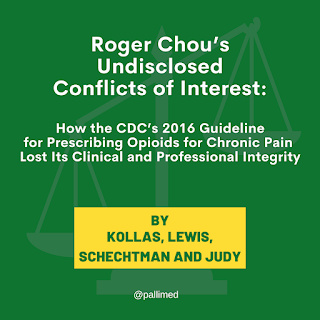 An extremely important article was just posted last week on September 17, 2021.  We at The Doctor Patient Forum/Don't Punish Pain have been researching the CDC Guidelines and how they were written.  We specifically have focused on one of the main authors, Dr. Roger Chou.  We had the privilege of collaborating with a palliative care doctor who is also on the AMA Opioid Task Force, Dr. Chad Kollas. Dr. Kollas along with a few other chronic pain patients and advocates worked together to put out this phenomenal article showing in detail the unacceptable conflicts of interests Roger Chou has, and explains in why we need a congressional investigation into how the guidelines were written.  How can you help?  Familiarize yourself with the content of this article, and forward it to your local legislators. your local representatives, your senators, etc.  The following goals are listed at the end of the article:

"1) The CDC should immediately rescind the most harmful or misapplied portions of the 2016 Guideline. This should include renouncing and rescinding arbitrary dosing thresholds, commonly referred to as MME, by health insurers, state and federal governments and pharmacies. It should also include a ban against involuntary opioid tapers.

3) The CDC should suspend indefinitely any plan to implement its 2022 Guideline, which are currently expected to be published in the Federal Register in late 2021.


In addition to these measures, we call on the United States Congress or the U.S. Department of Justice to investigate Roger Chou, PROP and the Centers for Disease Control to determine whether they violated any federal laws or policies when creating either the 2016 or the expanded 2022 Opioid Prescribing Guidelines. We also encourage legal scholars to examine the harms inflicted upon patients with chronic pain as result of the 2016 Guideline, or from their misapplication, to determine whether these harms could be remedied through litigation. Undoing the ongoing harms of the CDC’s Opioid Prescribing Guideline for Chronic Pain and preventing further harms from the expanded 2022 Guideline - which were drafted with all the same ethical conflicts of the 2016 Guideline yet will affect even more patient populations - is an imperative for all invested in public health and the treatment of pain. Undoing the harms of the CDC Pain Guidelines represents a critical step in restoring balanced pain policy, which must include access to judiciously prescribed opioid analgesics, to the millions of Americans living with chronic pain every day of their lives."

Here is the link to the article.