Suicide Due to Pain and a $7 Million Settlement 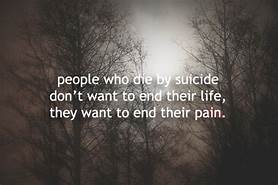 A crucial precedent has just been set. Brent Sloane took his life in 2017 due to a lack of pain medication, and his family decided to sue. In August of 2021 that family was awarded $7 million. Brent Sloane's family said he ended his life because a doctor denied his prescription for opioid medication that he desperately needed. Brent sent a text to his wife that said "they denied script, im done love you." Thirty minutes later, he took his life. This article from 2018 explains the lawsuit. “The intention of the lawsuit is to bring light to that fact that people who experience pain should not be disregarded and tossed aside,” said an attorney for the family of Slone. Why is this lawsuit so important? Until now, chronic pain patients haven't been very successful when trying to sue a doctor for medically abandoning them or forcing them to taper off of opioid medication. This win can set a very important precedent.

So, let's talk about suicide due to pain. First, keep in mind what anti-opioid zealot, Andrew Kolodny, had to say about suicides from pain. He called the suicide claim “totally bogus,” saying suicide can result from the severe anxiety and panic attacks associated with drug withdrawal -- a problem that stems from addiction to painkillers, he said, not failure to treat pain appropriately. This is the man who is called the "opioid prophet," and who has dictated drug policy since 2011 when he started PROP.

Thankfully, not everyone listens to Andrew Kolodny. In 2020, University of Alabama funded a study led by Dr. Stefan Kertesz looking at suicides from patients cut off from opioids. “When we see patients die in ways that involve our care, we are obligated to dive in and investigate it,” Kertesz said.  If you know of people who may have taken their lives due to being cut off from pain medication, please let the family know about the study. Dr. Kertesz has explained that even when patients are on "high doses of opioids" that may exceed the CDC Guidelines, that it may be more dangerous to stop them than to keep them on their medication.  Anne Fuqua, an RN and pain patient, is also assisting in this study. "Fuqua said she has collected about 111 suicides on her own. She has identified another 500 potential cases from social media."  If you know of anyone who may be interested in the study, please direct them https://go.uab.edu/csiopioids. Or they can email csiopioids@uabmc.edu.

Several important studies have been published recently showing that stopping opioid prescriptions cause suicides. Two of those studies are:

What can we do with this information?