Do Doctors Get Paid More Money to NOT Prescribe Opioids?

Many of you have heard Kolodny or other anti-opioid zealots make comments like "pharma pays doctors to prescribe opioids." So first, let's address that. It is illegal for a pharmaceutical company to pay doctors specifically to prescribe their medication. What they can do, though, is pay them as "consultants" or for "speaking engagements." Do I think it's ethical? Probably not, but that's how it works. Medical device companies do the same thing. Well, actually, they often pay more than pharma, as seen in this article called "Medtechs top pharma in cash to doctors for consulting, travel.."  If you ever want to look up a company and see how much they pay doctors, or look up doctors to see how much they've accepted, you can look up these two websites. Open Payments and Dollars For Docs. So, do opioid makers specifically "pay doctors to prescribe"?  I would say no more than any other company does. For anyone to specifically state that companies that make opioids pay doctors to prescribe is incredibly misleading. But, that doesn't stop doctors from making that statement or from media repeating it. Why would people want to mislead the general public about opioids? It helps vilify these companies for the litigation narrative we're always talking about. This whole narrative was done in preparation for opioid litigation, which we see taking place across the country now. There are around 3,000 lawsuits that the Attorneys General have brought against pharma, pharmacies, and manufacturers.

What they don't mention is that doctors are now getting paid more money to NOT prescribe opioids? Yes, you read that correctly. BCBS of Michigan actually incentivizes doctors by paying them 35% more money if they don't prescribe opioids after certain procedures. Read all about it in this article called Fewer Opioids, More Pay: New Tack on How Doctors Prescribe Them . So, if you live in Michigan and have BCBS, this might be the reason why your surgeon isn't treating your post-op pain with opioids. I'll include the rest of the article below.

"Some doctors in Michigan are prescribing as few as four opioid pills for pain relief after a common gall bladder surgery.

And, in return, they are paid 35 percent more for doing the surgery in tandem with patient education.

The plan is an effort by Blue Cross Blue Shield of Michigan to reduce the number of opioids prescribed. It works like this:

In pre-operative consultations, participating doctors walk patients through ways to reduce pain without using opioids, like icing and switching between ibuprofen and acetaminophen. When the doctors pull out their prescription pads, they prescribe the bare minimum of pills, ranging from four to 10, depending on the surgery.

That is far fewer pills than are traditionally prescribed. A cholecystectomy—where the gall bladder is removed—is one of the most common surgeries in Michigan. Doctors typically prescribe between 40 to 120 pills for that surgery, according to David Bye, a health-care analyst and project leader for Blue Cross Blue Shield of Michigan.

The plan is a reaction to the opioid epidemic and a tidal wave of drug abuse that’s swallowed up billions of dollars in state and federal funds. But it also adheres to a growing philosophy within health-care circles that reimbursement models should shift to reward quality, not quantity.

The payment plan was designed by the Michigan Opioid Prescribing Engagement Network (OPEN)—a collaborative of insurers, doctors, state government, and the University of Michigan. Blue Cross Blue Shield of Michigan appears to be the only insurer that pays doctors to use this type of pain program. However, other BCBS branches have expressed interest in the payment plan, Bye said, so it has the potential to spread to other states.

Insurers are increasingly weighing in on ways to combat the opioid crisis. For example, Cigna no longer covers the opioid OxyContin (oxycodone), a Purdue Pharma product, for consumers who are insured through their job. Instead the insurer encourages patients to use Collegium Pharmaceutical’s Xtampza ER, an oxycodone equivalent with abuse deterrent properties.

The general reasoning behind BCBS of Michigan’s initiative is if patients are taking fewer opioids, or don’t have access to them unnecessarily, then there will be fewer chances to become addicted. And some patients don’t take all the pills they’re prescribed, so decreasing the number of pills they receive post-surgery decreases the possibility that someone else could get their hands on them.

The Centers for Disease Control and Prevention declined to comment on this specific program, but said “reducing exposure to prescription opioids, for situations where the risks of opioids outweigh the benefits, is a crucial part of prevention.” The agency has its own prescribing guidelines it published in 2016. 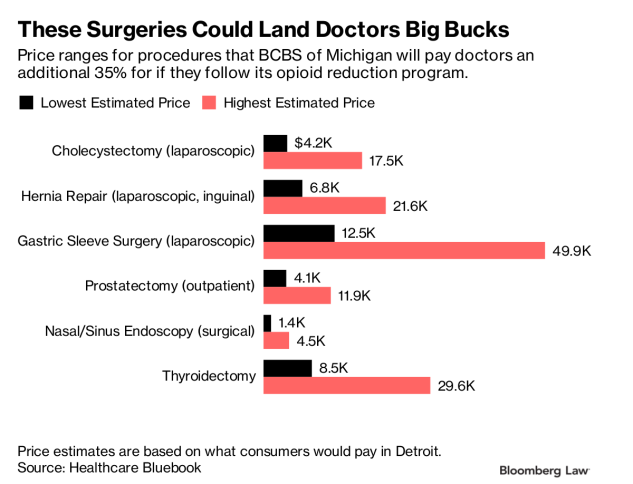 Cholecystectomies can cost roughly $4,200 to $17,500, according to estimates from Healthcare Bluebook for laparoscopic cholecystectomies in Detroit. Location and insurance coverage impact the price.

With that price range, doctors can make roughly $1,470 to $6,125 more for the same surgery using this payment plan because the 35 percent increase is applied to the total cost of the surgery, not just the physician fee.

Despite the huge payout, BCBS of Michigan isn’t expecting it to hurt their bottom line. In fact, Bye is expecting this to save the insurance company money in the long run.

“Addicted patients are very expensive down the line,” Bye said. Costs add up for anything from addiction treatment, to overdose care, to the litany of health problems that can show up later, “especially with a lot of opioids users turning to heroin as supplies dry up.”

Doctors who want to participate in the prescription plan are reimbursed at a higher rate when they use a “modifier 22" in their bill. Modifier 22’s aren’t just used in this context. They’re generally used when surgeries are expected to be more difficult, like surgery on an obese patient, and provide for higher reimbursement levels

Bye said that though he’s not concerned about potential fraud in the program, BCBS of Michigan can audit the program by checking the medical records of doctors, who are supposed to keep a written record of the pre-op pain consultation. The insurer doesn’t require doctors to follow a script or ask specific questions in their pre-operative consultations, but Michigan-OPEN provides some guidance on its website on what doctors should discuss with patients, including whether they’re taking medications like sleep aids.

However, there’s no requirement to address whether a patient suffers from chronic pain in order to receive the higher surgery payout. That presents issues for patients in chronic pain, Jianguo Cheng, president of the American Academy of Pain Medicine, a physician, and a pain specialist, said.

Cheng is also wary of possible conflicts of interest. “If the physician has an incentive to reduce pain medication as much as they can then that could create a problem,” Cheng said.

Word of the payment plan is slowly making its way across the state, and Bye said BCBS of Michigan is already looking into what other surgeries could use this payment system. The insurer has gotten about 80 bills using this payment pathway since the insurer started the reimbursement program in July. It’s open to anyone performing these procedures statewide.

“The data is already starting to show there are lower volumes of pills being prescribed,” Bye said. “So from a plan perspective there is good movement, and it’s good for the physicians across the board.”'