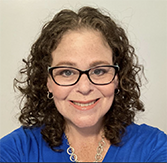 Bev Schechtman, 45, is one of the founding members of Don’t Punish Pain Rally. She grew up in northern New Jersey, and has lived in the Raleigh area in North Carolina since 2009. Bev has been married to Randy for 17 years, and has two teenage daughters, Emma, 16, and Livvy, 13. She also has a 2-year-old Aussidoodle, Griffin.

Bev has been living with Crohn’s Disease and Psoriatic Arthritis for over two decades. She first contacted Claudia after being denied opioid medication while hospitalized for kidney stones in 2017. She was denied due to being a survivor of childhood sexual abuse. Bev is a passionate advocate for people with chronic pain and illness as well as those who have survived sexual assault/abuse. Bev has her B.A. in Psychology and hopes to get her M.S.W. in the near future. Bev is a voracious reader and researcher. She is passionate about understanding why pain patients are being mistreated, so she can educate other patients and empower them to fight back. Bev hopes her advocacy work brings awareness to the anti-opioid zealots who are profiting off of punishing pain patients while pretending to care about those with addiction. She also believes strongly in Harm Reduction efforts.

In her free time, Bev can be found reading, watching soccer, and playing with her emotional support animal, Griffin.